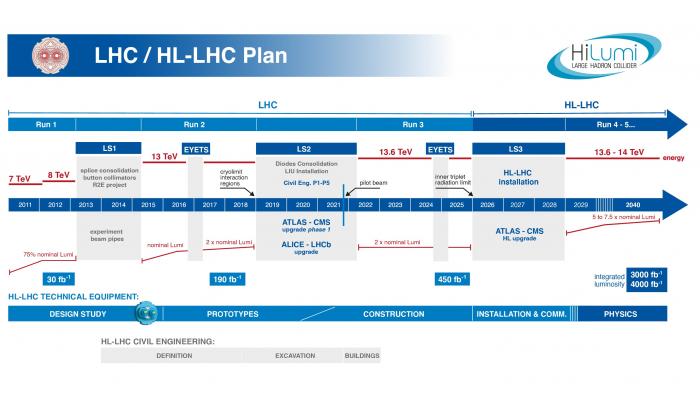 Following the recommendations of both the LHCC (LHC Experiments Committee) and the CMAC (CERN Machine Advisory Committee), a change to the LHC schedule was presented by CERN management to Council and its subordinate bodies in December and approved shortly after its presentation to the machine and experiment communities at the LHC Performance Workshop end of January 2022.

The new schedule foresees Long Shutdown 3 (LS3) to start in 2026 (i.e. one year later than in the previous baseline) and to last for 3 years (instead of 2.5 years), finishing with the hardware and beam commissioning in early 2029.  Production schedules across the project will remain unaffected by this change and will therefore allow the work for the High-Luminosity LHC programme in the machine and in the ATLAS and CMS experiments (the so-called Phase-2 upgrades) to be completed with appropriate schedule margins.

As a result of the new LS3 start date, the extended year-end technical stop (EYETS) is now scheduled to take place in 2024/25 and last for 17 weeks, while the two preceding YETS will be of the standard length of 13 weeks beam to beam. The preferred scenarios and duration of ion runs during Run 3 remain to be formally confirmed but are likely to be scheduled in 4 week-long periods always at the end of the year, leading into the (E)YETS.

The injectors shutdown in LS3 is at this moment still under discussion, the baseline assumption is to start it in parallel with the LHC in 2026.