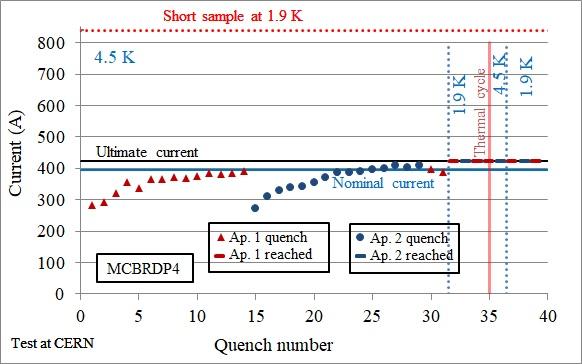 During the past weeks, the fourth prototype of the MCBRD magnets (orbit correctors of D2 based on canted cos theta design) has been tested at CERN.

This magnet was fully built at CERN 927 using standard procedures, and has reached the performance requirements. The training was initially done at 4.5 K to gather experience on virgin training at the same test temperature used in IMP test station by the collaboration steered by IHEP.

Magnet reached nominal current (7 TeV equivalent) with about 15 quenches per aperture at 4.5 K. At 1.9 K it went to ultimate current (7.5 TeV) without further quenches, and no retraining after thermal cycle, see attached plot.